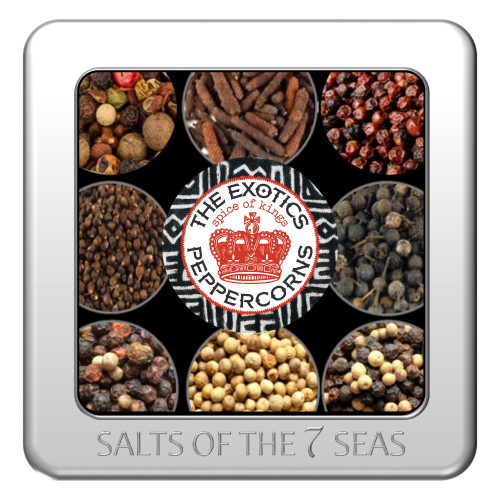 THE SPICE OF KINGS

Salts of the 7 Seas wants you to sample the world!

We are honored to present the KAMPOT PEPPERCORNS, the premier peppercorn to the world’s discerning palettes. Nestled in the beautiful Kampot valley, our resource for Kampot Pepper is a family owned 15-hectare plantation that employs a team of local farmers under the guidance of a 5th-generation Cambodian Pepper Master. Traditional expertise and organic conditions ensure exceptional quality. Each peppercorn is hand-picked twice: once for ripeness and then after drying, for quality and color.

Join in the Renaissance of Cambodia’s Kampot Pepper—a come-back story of culinary and cultural triumph. Grown for centuries in only Cambodia's Kampot province, Kampot peppercorns gained the attention of a legendary French chef, Auguste Esoffier in the 1890's. Escoffier prized these peppercorns for their exquisite heat and flavor. And once discovered by him, he would settle for nothing less than these beautiful dried pepper berries. Tragically, they disappeared in the 1970’s when Cambodia suffered a genocide under the Khmer Rouge regime, but decades later, they were brought to life with the recovery of the Cambodian people and their traditional agrarian society.

A proud member of the Kampot Pepper Promotion Association (KPPA), the farm operates in accordance with the Pepper Master's heritage and the KPPA, the farm plants, grows, harvests, cleans, solar dries, sorts, and packs their variety of black, white, and red peppercorns. 5% of the profits are reserved in a Social Fund for workers.

The most expensive and rare of the Kampot peppercorns is the red berry. It is the sweetest, with an initial pepper flavor followed by a tangy floral aromatic finish with a punch. Enjoy its sweet and complex heat on fruits, try fresh mangoes, on sweet potatoes and in Cog Au Vin!

Traditional peppercorn taste and none of the bitterness. Aromatic at a distance, Kampot Poivre Noir it has a well-rounded flavor with expected heat but an unan-ticipated sweet finish. Perfect for the tabletop but robust enough for steaks, stews, and braise cooking heat.

Hot and creamy, is subtle with a hint of floral and mildly aromatic. When ground, this peppercorn is perfect for seasoning light colored dishes such as white sauces, cream soups, and potatoes.

Named after the Cambodian Capital City of Phnom Penh, this exotic combination of the Black and White Kampot Peppercorns offers a subtle sweet heat. It is a beautiful peppercorn blend full of flavor.

We honor Auguste Escoffier, (1846-1935), who is credited with helping to raise the status of cooking from a laborer's task to an artist's endeavor. Renowned as "The King of Chefs and The Chef of Kings,"Escoffier left a legacy of culinary writings, procedures and recipes that are indispensable to modern cooks, and remains perhaps the foremost name in French cuisine. The highly flavorful Mélange de Escoffier™, a complex blend of all three Kampot peppercorns, Black, Red and White offers a rich and powerful spicy compliment to roasted meats and poultry, fresh potatoes and fresh vegetables. *** ALLERGY WARNING! Pink peppercorns in some products may present a Tree Nut Allergy Reaction.

The ancient history of Black Pepper is interlinked with that of the Long Pepper (Pipir Longum), which was the first pepper that was traded and used in Europe. It was not until chili peppers reached Europe from the Americas that the long pepper almost completely disappeared from European cuisine, and was replaced by black pepper. Long Pepper still plays an important role in many Asian, North African and Middle Eastern cuisines and in Ayurvedic medicine.

From the pepper family, Cubeb has a peppery, slightly bitter, pungent flavor that’s tinged with a hint of allspice and nutmeg. It is very popular in Middle Eastern cuisines. Legend has it that the king of Portugal banned the import of Cubeb berries from Java to bolster the sale of black pepper to encourage trade relations with India and Europe. Spice merchants would sterilize the seeds to keep them from being grown on foreign soil. It’s a culinary secret today, but not for long!

King’s Ransom is a delightfully aromatic and flavorful Exotic Peppercorn Blend containing the black, white and red varieties of the highly regarded Kampot peppercorn from Cambodia, a flavorful green peppercorn from Kerala, India, the ancient spice berry called Allspice that imparts a sweet and spicy flavor of cloves, cinnamon and nutmeg and the equally interesting addition of an Asian spice called Szechuan peppercorn that, when you bite it, releases an immediate citrus-like flavor followed by a slight numbing effect which bursts into a tingling sensation on the tip of your tongue. In addition, we have added the ancient Grains of Paradise, the glossy brown seeds that are often used as a pepper substitute as their zesty flavor is reminiscent of pepper with hints of butter, flowers, cardamom and coriander. Grains of Paradise were given their name by spice traders in the middle ages who wanted to inflate the price by inventing a story that these special peppers only grew in Eden, and were collected as they floated down the rivers out of paradise. This unique and beautiful blending of peppercorns and ancient spices bring an exquisite flavor profile you will enjoy on roasted meats, creamy potatoes, veggies and more! *** ALLERGY WARNING! Pink peppercorns in some products may present a Tree Nut Allergy Reaction.

A spice said to be from Eden itself, Grains of Paradise, do not disappoint. Several hundred years ago, black pepper was much more expensive and difficult to obtain, so spice traders sold grains of paradise as a substitute from nearby Africa. Grains of paradise are a spice worth a couple minutes' meditation. Smell a small handful and you'll be hit by an intense woody, almost forest-like aroma. Then pop one in your mouth and bite down. There's an initial burst of inviting, peppery warmth, full but in no way harsh. Then a lifting note of citrus and something almost herby. In an instant, the spice's woody character takes hold, and tree bark gives way to cloves, cinnamon, and the faintest hint of cardamom. And the finish? Some of the most pleasant, full-bodied heat you’ve had the pleasure to encounter. It lingers for a while, not as a tingle or a burn, but as an assertive, gentle flame.
USE: Crack these intriguing little brown nut-looking grains into salad dressings and enjoy the herbal essence of—lemon thyme, rosemary and sage. Also good in rubs and rich sauces, even gingerbreads and spice cakes.

White Peppercorns from the tropical hills of Kerala, India are exceptional with a balanced heat and big, bright citrus notes that compliments a wide variety of foods. White peppercorns are actually red when picked late in the season, but after a week of washing, the skins come off revealing a smooth white seed underneath. These incredibly fresh, white beauties are no ordinary white peppercorns. They are ideal for seasoning and complimenting white sauce, fresh soups and potato recipes.

Classic Peppercorns of the World Sampler