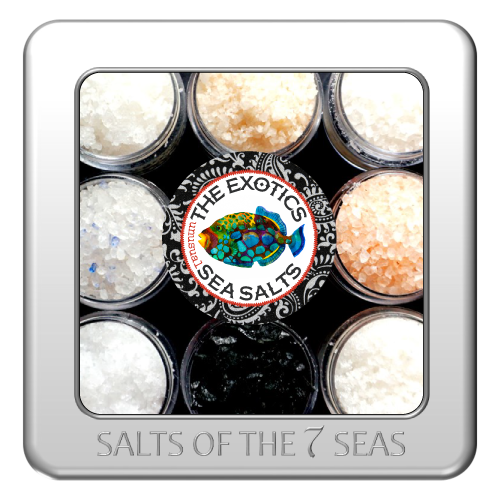 Bringing beautiful, natural  gourmet sea salts to life depends heavily upon the cooperation of Mother Nature and the skill of the salt artisan. With the earth covered by vast oceans of salt water, you would think sea salt must be everywhere, but not so, that is where the skill and long hours of patience waiting for the sun and wind to work their magic comes in. With only a limited window of time available each year, when the sun is at its peak and rainfall at a minimum, these beautiful salts are gently coaxed from the brine waters of shallow hand-crafted salt pans using skills and methods passed down for thousands of years. Each body of water has a unique mineral profile as well that further defines each salt’s individual flavor and texture.

Some of these Salt Stories tell of ancient oceans of long ago, their precious salts resting now high in mountain ranges where they must be mined, or in underground hot springs beneath the earth that bubble up in the most unexpected places. Some are newly discovered brine pools buried under scorching deserts, remnants of ancient seas, still salty but fed with fresh, pure waters of underground streams. Each Tin measures 5.25"x 5.25" x 1.5"H. Each container holds about 1/2 oz.

Salts of the 7 Seas wants you to enjoy this beautiful sampling of salts we have especially chosen for their rareness and exquisite taste.

Sapphire Blue™* [Iran]
Sapphire Blue™ Persian salt, a very rare breed of sea salt, has been valued for its good looks and fine taste. Sapphire Blue™ is one of the rarest salts and is extracted from a single salt mine in the northern province of Semman in Iran. The intriguing blue color, actually an optical illusion, occurs during the forming of the salts crystalline structure as intense pressure is exerted on the salt deposits. The individual crystals fracture the light in an unusual way and the resulting blue color becomes visible. Sapphire Blue™ has an interesting quality, in that it initially presents as a strong salt, but almost immediately dissolves into a milder, more subtle salt with a pleasant aftertaste. Sapphire Blue™ enhances all foods and is delicious with fois gras, truffle dishes, seafood, and meat dishes.

Sagrada Rosa™* [Peru]
From the Sacred Valley, high in the mountains of Peru, this delicate pink sea salt is hand-harvested from literally thousands of small rectangular plots owned by families for generations. Brine water bubbles to the surface from a spring called Qoripujio, water from an underground ancient ocean that now lies deep within the mountains. This salt is delicate in flavor and a lovely compliment to all your food.

Salt of Heaven™* [S. Korea]
Harvested from the Yellow Sea of S. Korea, Salt of Heaven™ is full of natural minerals. This flavorful salt is a perfect compliment to all your cooking. In 2008, Salts of the 7 Seas™ was invited by the Jeollanam-do Provincial Governor, New York Trade Office of South Korea, to be their guest and attend the inaugural Solar Sea Salt & International Food Fair in Gwangju. On a cloudy, wind-swept November day, we visited an impressive family-owned sea salt farm where they proudly showed us their custom black tiled salt ponds used for gathering sea waters and evaporating them using only solar heat. The salt is almost perfect fluff, crunch and has a distinct salty profile.

Dragon's Wing™* [South Africa]
During the South African summer months pure, cold, arctic waters sweep up the west African coast and are captured in the salt pans of a salt farm near St. Helena's Bay. From these waters, in the stillness of the early morning, delicate crystals begin to form on the brine pools and as the crystals grow, they float on the surface coming together on the water to form an ethereal wing-like structure reminiscent of a dragonfly's wing! These glittering crystal "wings" are gently scooped from the water and laid in trays to dry in the sun. This salt is the "cream of the salt pan" and is highly prized not only for its lace-like wings but for its delicate salty flavor as well.

Tibetan Rose™* [Himalayan]
From ancient sea beds high in the Himalayas, this beautiful pink salt is known for its healing powers & is full of minerals. Rich and salty, it is delicious in all your cooking and baking. Lovely in a clear salt grinder, too!

Fire & Ice™* [Iceland]
One of the truly most unique salts you will ever encounter, this delicate flaked salt, born literally of fire and ice, is produced entirely by geothermal forces. In an ancient world devoid of trees and warming sun for most of the year, salt was still a necessity of life in Iceland. Traditional salt harvesting methods using solar evaporation or fueled heat, employed all over the rest of the world, was not available to the ingenious Icelandic people so they harnessed the heat of geysers to evaporate the pure sea waters on the coast of a small peninsula of Reyjanes, where some of the purest seawater imaginable is used to make this lovely salt.

Kalahari Desert Salt* [South Africa]
Harvested from under the blazing sun of the Kalahari desert, in a remote and pristine area within the Kalahari Basin, this crystal salt has an amazing flavor. In an uninhabitable pollution-free region, saltwater is pumped up from an ancient underground brine lake, fed by three underground streams, producing a sustainable and renewable pure source of water. The brine is sun-dried in the salt pans resulting in a lovely white crystal salt, delicate in flavor and perfect as a finishing salt.

Bali Hai™* [Bali Hai]
Born of the union of earth, wind and sun, these pyramid flakes are harvested young—during sultry mornings and rainy afternoons on the Island of Bali in the Indian Ocean. Snow white with a subtle salty flavor, Bali Hai™ is salt perfection. These flakes are delicious on fresh veggies, salads and sea foods.

Cyprus Onyx™* [Isle of Cyprus]
From the Isle of Cyprus in the Mediterranean Sea, this incredibly crunchy salt forms in little pyramids and starts out as a pure white salt. Adding vegetable charcoal, which is good for the digestion system and helps to remove impurities from your body, it's given a beautiful deep black color that makes it ideal for a dramatic finishing salt on pastas, potatoes, eggs, and veggies.

*** We strive to bring you a variety of different sea salts and sometimes we are forced to substitute with another sea salt, but we are sure that you will find it equally as amazing!

Classic Peppercorns of the World Sampler